Winter has ended and with all the vacations, events, and work being done for GDC, we haven’t had a lot of time to share some of the big updates for you since our last update. But we’re going to rectify this by sharing you one of the biggest updates we’ve had since releasing the “Try Now” button for the Google Play Store.

Synative Playable Studio Now Compatible with Google UAC
We’ve been working on this for a while and have been asked by numerous developers about full compatibility with Google UAC (known in the past as Google AdWords). It seems many are excited at having a playable on one of the biggest platforms in the world and we didn’t want to disappoint.

After many weeks of effort and the help of Google engineers, Synative playables are now supported for Google UAC and you are now able to export them and place them in the queue without any testing required or approval needed. This means, just like exported Facebook playables, you can have your ads exported and in the inventory in less than 30 minutes.

This is exciting news for all of us, but before you start building hundreds of ads, there are a few things you need to do for your playable to be accepted and usable on the platform:

One great example of this is 4:33 with their game Boxing Star. They decided to show off some of their greatest fighters that you could have a chance to be and win the title belt with.

Quick Tip: If you are looking to save a few bytes for your playable, try to drop the quality and length of your audio files by turning down the bitrate. Smaller bitrates can eat up less space with minimal loss in quality. We recommend 64kbps for sound effects and 96kbps for background music.

Safety From Poor Internet Connections One of the issues with playables is if a player has a poor connection, we don’t want them to miss out on the ad, So we have built a new way to help you out in case your player loses internet after they hit a tunnel, a dead zone, or accidentally turns off his wifi.

In the project settings, you will see we added a few added choices. Each is for different situations that you may encounter. Here’s an example of what you’ll see. 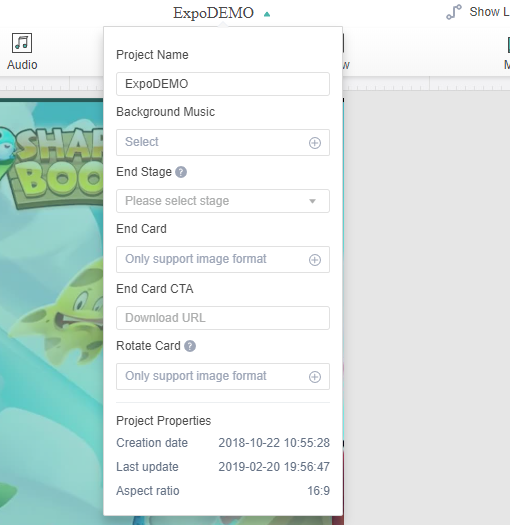 First click on the project name to open the project properties. After “Background Music”, you’ll see we added four new options. Let’s look at all of these.

End Card - If the player loses connection while downloading the playable, they will still be able to have an image shown that is clickable anywhere on the screen that will take them to the End Card CTA.

Rotate Card - This allows you to show an image to tell players to rotate their phone to play the playable. Required by a few ad networks.