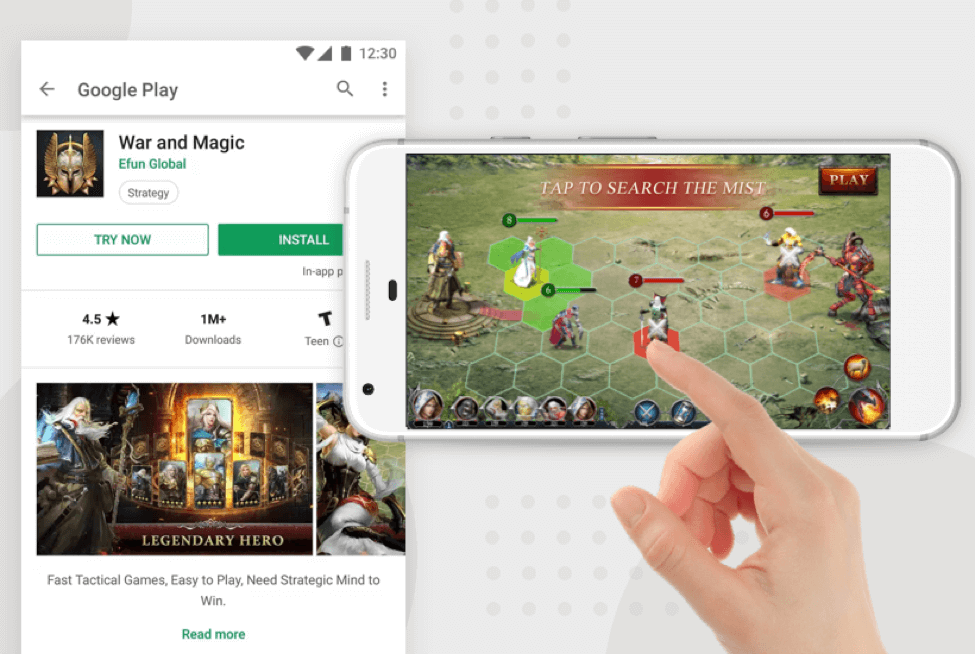 Earlier this year, Google announced that anyone using the Google Play Store would have the chance to try out apps without the need to download the full app. This would allow people a chance to try a game and see why it’s a great idea to continue on in the game. Everyone was excited about the news, but a bit nervous about how exactly to implement this with their app.

Building a playable demo has always been a welcomed problem as it took developer time out of the development of the game, but would reap great rewards as players could get a chance to get even more excited about downloading their game. As such, many developers have been looking to new ways to create demos faster and at a quality that gamers would enjoy.

Today, with the help of Google, we are happy to share some big news. Anyone using our Synative Playable Studio can now create their own “Try Now” demo for the Google Play Store, eliminating any bottlenecks developers had in making their own demos.

When exporting projects, you can now choose the “Google Play” option. You’ll receive an .apk file that contains your playable ready to be added to your next game update. The full instructions on adding your playable to your game will be available if you contact Synative now or in a future blog posting.

“We are very excited to share this with our current and future clients,” said Cynthia Du, co-founder of Synative “It’s something we’ve wanted to do for a few months, and are happy that with the help from Google, we are able to share with you today.”

Luke Stapley, our Marketing Manager agrees. “This is game-changing for anyone trying to put their game out there among the thousands that are already in the Store. We’ve seen game demos work in every part of the game industry and we are happy to help add mobile to the mix. We’re looking to help every developer big and small be a part of this and want to get the word out there.”

With this news, the Synative Playable Studio now has the option to export playable video advertisements or demos for Facebook, Google Play Store, and many of the most popular ad networks such as IronSource, Unity Ads, Applovin, etc.

If you are interested in having your game demo built, first create your own account by signing up for the Synative Playable Studio.